Here are the best policies to combat global warming

The Economist has recently published three articles on energy and climate that received all my attention. One was a recap on which actions have cut the most greenhouse gases emissions. And the results are quite surprising.

By far the most effective mean is the Montreal Protocol which has cut emissions by a cumulative amount of 135 billion tonnes of carbon dioxide equivalent between 1989 and 2013, an annual equivalent of 5.6 billion tonnes.

This high figure can explained by the fact that by targeting chlorofluorocarbons (CFCs) , highly potent greenhouse gases, the Montread Protocol has been very successful in combating global warming. I dream of a similar one for black carbon alias soot.

In second and third come hydropower and nuclear, which cut emissions by 2.8 and 2.2 billion tonnes annually. I know this will mean some people will believe we should more nuclear reactors… but that’s not the way to go as we will see soon.

I present you the full graph below in case The Economist took it down or you couldn’t access it : 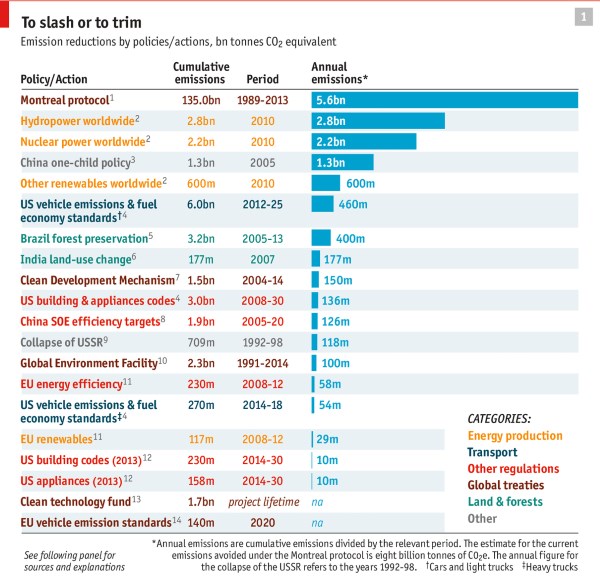 There are a few points I’d like to make :

The Economist’s article has a second part – and graph – that turns to the future with what policies would bring the bigger cuts by 2020.

Brazil keeping on fighting deforestation has the biggest potential, followed closely by energy efficiency efforts in China. Third comes the growth of renewables in the European Union. Fourth is the growth of solar, wind and  the likes in China.

The other articles that I found are