We have seen recently that China is going full speed ahead on cleantech and climate change. Well, India is set on not staying behind either. Here are some news I collected recently.

The Indian governement is fully aware that it won’t be able to bring electricity to the 400 million people lacking it there with coal. This would destroy the country and the entire planet. We have seen that it plans to do it with solar.

India seems to be planning to significantly change the dynamics of its National Solar Mission, as it has proposed to add 20 GW through ultra mega solar power projects of 500 MW capacity or more.

(…) The Ministry of New and Renewable Energy recently issued a proposal to implement 25 ultra mega solar power projects with capacities between 500 MW and 1,000 MW. The projects will be set up over a period of five years. Small solar parks of 100 MW each would be considered for small states.

Now that’s some commitment. But wait, there is more. This time on wind power.

Indeed, the country could soon see over 10 GW (10,000 MW) of wind power capacity installed every year.

This is even biggen when one knows that currently, the total installed capacity is of 21 GW and that it is estimated that 6,000 MW of additional wind power capacity will be installed in India by 2014.

See the graph below for the evolution of wind power capacity over the past few years there : 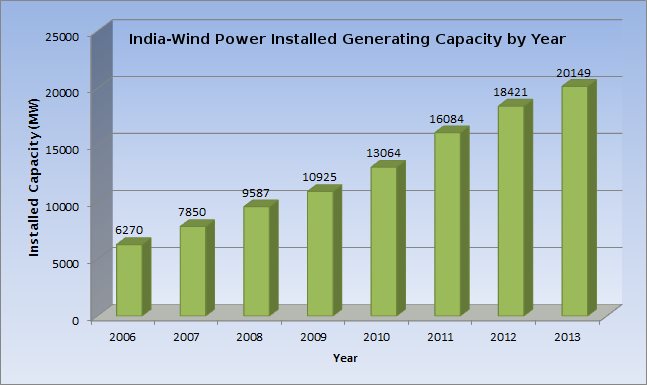 Back to July, TreeHugger reported that the country will plant two billion trees along its highways. Two billions may be a lot but very little compared to what should be plant to significantly slow down climate change. A trillion trees might be needed to do so. But heck, this would at least contribute to clean up the air.

To conclude : we have seen that India is ready also very serious on tackling climate change, air pollution and creating jobs. It would be nice if some other nations would follow their lead.