These days if you read renewable energy news, everything is shining for solar photovoltaic: it is fast becoming the cheapest energy source, technology is getting better every year and it is wildly successful from the US to Asia, from Europe to Africa. Analysts are predicting in could become the first source of electricity globally by mid-century. However, solar energy’s greatest challenge could dampen some of this enthusiasm.

The duck curve, as it is called, refers to the difference between peak electricity production from solar and peak electricity demand. With solar panels generally facing South (or North in the Southern hemisphere), peak production happens hours before peak demand, later in the afternoon as people come home after work and turn on their television, air conditioning and so on. Having too many solar photovoltaic installations facing South leads to overgeneration, which leads to solar panels being turned off as utilities can’t cope with the glut of electricity.

The result, seen from utilities, looks like a duck: 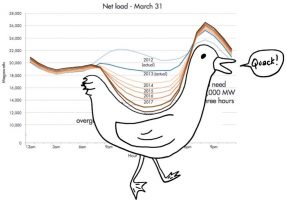 Among the many possible solutions to this is starting installing solar PV panels towards the Southwest and even, due West. Back in 2014 I had written two articles on how doing so could make a lot of economic sense despite what one would think. (South-facing panels maximise electricity production, hence are more profitable).

In Hawaii, the duck curve becomes the Nessie curve and in developing countries such as Nepal, it becomes the shark curve as the electricity demand ramp of the late afternoon is even steeper. This makes the business case for west-facing solar installations even more compelling.

But as this New York Times article and many others have pointed out, West-facing solar panels produce only 14 to 20 percent less energy overall than South-facing ones but produce 50 percent more during peak demand periods. It turns out that electricity during peak-demand is also worth much more as:

This is a difference of over 40 percent. Installing panels facing West is thus a potentially great idea, and this for everyone.

For utilities, this enables them to reduce the need for costly interconnection with neighbouring grids and expensive peaker natural gas plants. One day, energy storage could mitigate this, but in the meantime, more and more utilities in US States from California and Texas to Missouri are incentivizing westward solar installations. Among notable examples,

For households, having solar panels facing West allows to produce more electricity when people actually needs it as they are coming back from work and cranking the AC, turning on the TV and so on. It also allows to cut demand from the grid when the electricity is much more expensive. If Time of Use (ToU) pricing is in place in your area, this peak demand electricity would cost more, and your solar panels would thus save you more.

To conclude, having solar panels facing directions ranging from South to West could help wipe out most of daytime energy demand, leaving night-time demand to be filled by energy storage, wind power, other renewables such as geothermal and biogas. But that is another story altogether.