For long, China was seen as a climate villain, fuelling its amazing economic growth by burning more and more coal. But times are changing, and the People’s Republic is emerging as a climate leader.

As Climate Progress reminded us recently, the country’s emissions have stopped growing in the past couple of years. I indeed first blogged about this phenomenon in May of last year. The main reasons: the economy is growing more slowly and coal use has started to get slashed.

In the meantime, renewables such as wind power and solar photovoltaic have been booming. Here is a graph from the World Resources Institute, quoted in the article on Climate Progress. 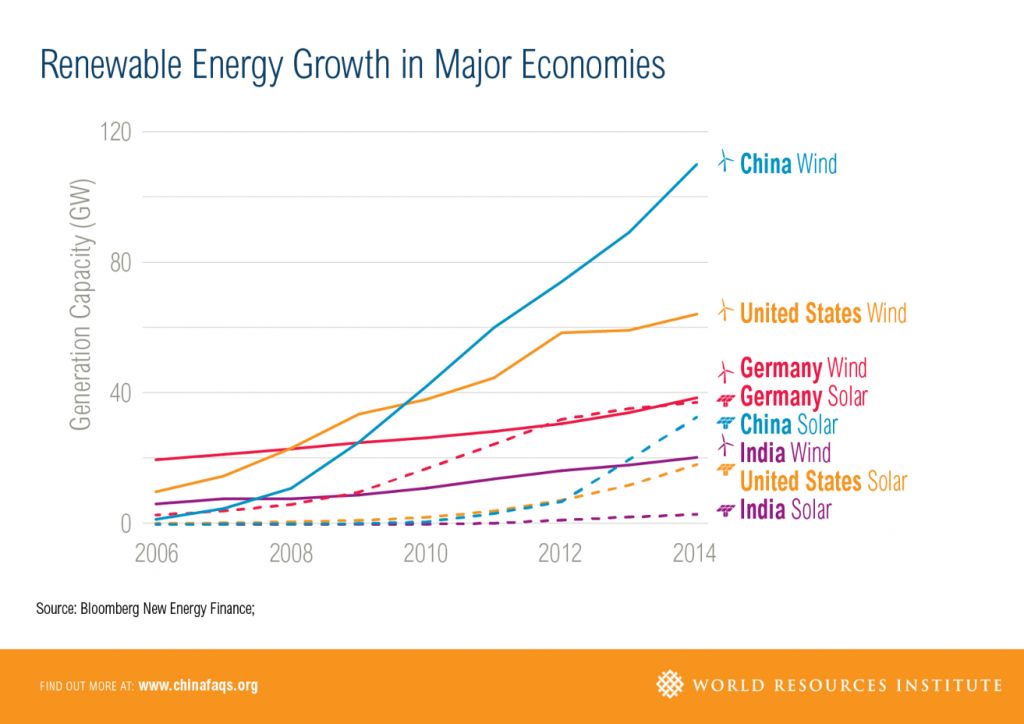 The impact on climate change is important as replacing coal with wind and solar PV essentially cuts emissions by a factor 50 or 20, respectively. Indeed, one kilowatt-hour from coal emits a kilogram of carbon dioxide, while the same amount of electricity from solar PV will emit around 50 grams, and wind will emit from 10 to 20 grams…

In another article, Grist sums up brilliantly why China is becoming a climate leader, with no less than seven reasons:

As one can see with the list above, the country’s plans are pretty much all-encompassing and denote a holistic approach.

Another way China is leading forward is when it is publishing new dietary guidelines that are due to halve per capita meat consumption by 2030. As The Guardian noted:

Should the new guidelines be followed, carbon dioxide equivalent emissions from China’s livestock industry would be reduced by 1bn tonnes by 2030, from a projected 1.8bn tonnes in that year.

Last but not least, Bloomberg notes that biking is making a comeback in the country as bike-sharing programs are being funded with hundreds of million of US Dollars in cities such as Beijing and Shanghai.