Today’s article is based on the second paper I wrote for my Sustainable Strategy Seminar for my MBA in Sustainable Business and Energy at Presidio Graduate School. It is a system thinking approach to obesity. Hope you like it ! 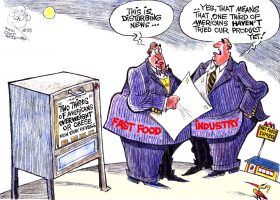 Obesity is now an epidemic as 2.1 billion people are either overweight or obese. To a recent study by McKinsey it is responsible for five percent of total deaths worldwide and has a $2 Trillion impact on our global economies ( 2.8 percent of global GDP).

To the US Center for Disease Control (CDC), “ Obesity-related conditions include heart disease, stroke, type 2 diabetes and certain types of cancer, some of the leading causes of preventable death.”If all this data was not enough, on a personal level, Time Magazine reported that obesity can cut life expectancy by a massive eight years…

Many factors come into play and the more one works on it, the less simple the solution is. As we shall see, this totally ties up to the six characteristics defined by Jeff Conklin in his article.

When one mentions obesity, one directly thinks about food and its impact. How much food and what kind of food is the most straightforward and simple answer. Convergent thinkers will thus work on how to decrease calories intake by the general population and the patients.

As an example, let us take the amounts of sugar and calories in a simple can of Coca Cola (140 kcalories to be compared to the 2,000 recommended intake for an adult woman and 2,600 for an adult man). One can see this kind of beverage is not healthy at all.

So lawmakers have been thinking of resorting to taxing sugary drinks. This is being done to date in four European countries, including France, as well as in Mexico (which has the world’s second obesity rate). In the US, only two cities have such taxes to date: Berkeley, CA, and Philalphia, PA,.

Then comes other solutions, such as exercise and portion control. While such solutions will work fine on a personal level they will not do anything on the societal scope. And this is truly what is at stake there…

Further to a discussion and brainstorming session with my friends, it appears that obesity is indeed not as simple as explained above. Many more problems – and fortunately, solutions – come to mind. Focusing on treating the patient instead of treating the society as a whole is akin to missing the forest for the tree. Having a more system thinking approach / divergent is thus required.

One of the main other cures for obesity is exercise. So, asking patients to exercise is well, but society needs walkable cities as a whole. The complete urban ecosystem is to be thought over. People going to do some cardio at their local YMCA or equivalent is nuts. The sheer absurdity of the situation was best illustrated by the 2013 New Yorker cover (cf picture on the right).

A study published in the British Medical Journal with 7,534 participants have shown that ”commuting by public or active transport modes was significantly and independently predictive of lower BMI for both men and women” This has to be compared with the fact that a mere percent of all trips taken in the United States are made by bicycle, and ten percent by walking. Of commuters nationwide, 2.8% get to work by walking and 0.6% get to work by bicycle. (AARP, 2012).

Then comes the importance of education. In his latest movie, Where to Invade Next, Michael Moore provides an hillarious example as he tries to give coca cola to French kids in a school. All kids refuse the soda and stick to their glasses of water despite his polite insistance. France obesity rate is 14,5 percent while OECD’s is 18,4 percent and the United States’ is a whopping 35,3 percent.

Educating kids on what to eat, when to eat and even how to cook seems fundamental to me. I have blurry memories of being taught how to cook at school. But Culture is also to be changed. It is not rare in Europe to take an hour to have lunch with colleagues or family. How many people in the United States eat a sandwich or worse in front of their computers ? As a French I believe that food is not only something that nourishes the body but also the soul, it has to be enjoyed.

Education is key in addressing the issue as kids have a slight (haha) tendency to show their parents what they learned at school and why this is important not only for them, but for the society. This is how societal change can be brought as today’s children will be tomorrow’s citizens.

The more I thought about the problem, the more I sketched on my notepad, the more complex it became. This reminded me that the essence of wicked problems – which I was introduced to during my energy classes – is that the more you work on them, the more wicked it gets. And discussing it with people around me did not make it any simpler. Obesity is definitively a health issue but it is a societal problem. What if our civilization as a whole was responsible ?

My last sketch was putting obesity in five categories. Health, Food, Transport, Education and Culture. This means that to solve this, the stakeholders are not limited to just the people and the Healthcare sector. No. Lawmakers from national and local levels have to be involved in Education, Urban Planning, Sustainability. Companies also have roles to play in proposing better products at a cheaper price. Why US frozen meals are horrible while their French counterparts are much better ? Why is quality food expensive and crap food cheap ?

We have seen the importance of Culture and Education above. But changing Culture is difficult. Education seems to be the most important to change habits but not the fastest. This leads to wondering what do we do in the meantime ?

Changing infrastructures and promoting bike lanes as well as public transportation is another large issue that will require time but could pay off before changing culture and educating children. Meanwhile, caring and “ curing “ the patients looks like the best solution. Changing their ways of life still requires a lot of effort on a personal level but little on the societal one.