Another world is possible. It is always a question of public willingness. The latest example of this is Costa Rica – 4.9 million inhabitants strong – which ran for almost four months on a hundred percent renewable electricity.

Last year, the country ran on 99 percent renewable electricity, with over 66 percent hydro, 16 percent wind, 14 percent geothermal (thanks to its many volcanoes), two percent biomass and a tiny 0.02 percent solar (source).

But this is only the beginning as the country is still relying heavily – as we all are – on fossil fuels for its transportation. Promoting electric vehicles, public transit and bikes is next. Traffic is a problem for the capital city. Traffic congestion… in a city less than two million strong.

Here is an inspiring TED Talk by Monica Araya, the founder and director of Costa Rica Limpia:

There are so many great ideas to take, to borrow from Costa Rica… This video is 1. Well worth 16 minutes of your time. 2. Worth spreading to your friends and family.

Now to get back to energy, given how transport is a major consumer and air polluter, going electric and promoting alternatives for Costa Rica and the entire world seems like a no-brainer. Unless of course, you are working for Big Oil and its armies of lobbyists.

The country invested early on sustainable electricity and tapped in its massive hydro electricity. Then in its National Parks. Each generation had its own green revolution. Inspiring, once again.

Now looking at the map below, you might think it is easy for this tiny country – 51,000 square kilometers, less than a tenth of France – to go a hundred percent electricity. But still, this is an achievement that has to be celebrated and a political will that needs to spread around the world, and spread fast ! 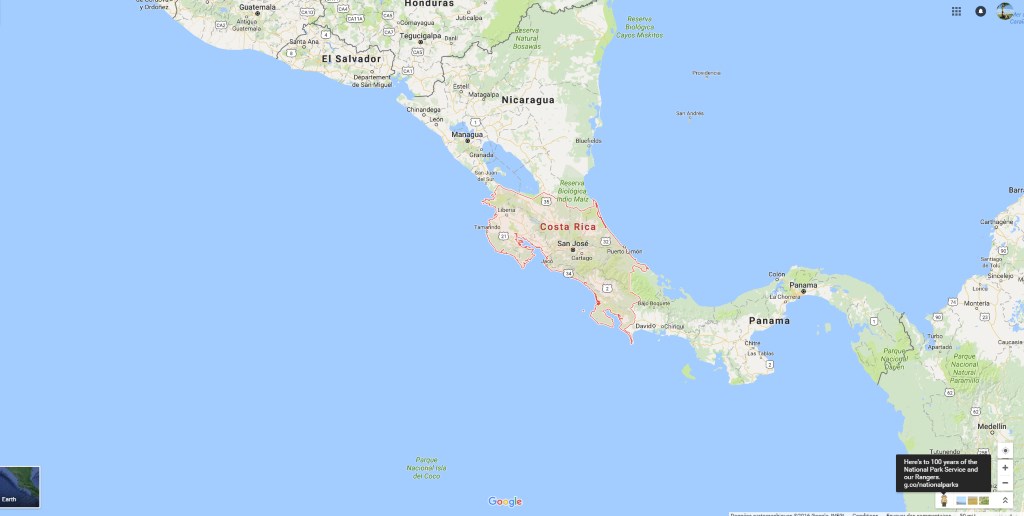 Personally I am still convinced the entire world could be powered solely by renewable energy sources by 2050 or even, before. There is enough potential for our Sun to power us all many times over.

Energy efficiency and conservation have staggering potential too. Both Reinventing Fire and Factor Five have shown that, as well as countless studies ever since.

Congratulations and Thank you to Costa Rica for showing us that electricity can be brought to an entire country for weeks and weeks without spewing carbon dioxide.