Solutions to cut US dependance on foreign oil

I came across interesting data last week : Americans consume more than two times more oil per capita than Europeans. As we will see, this can be explained by three factors.

Bringing oil consumption per capita to European levels would enable the USA to be independent from foreign oil, save a lot of money, create millions of jobs, prevent massive climate change and preserve the environment.

Luckily President Obama’s administration is working on increasing both the mileage of vehicles and the use of high speed rail to overcome the current economic downturn.

America’s addiction to oil is not new, nor are the solutions. What is new is the political will to tackle the issue with concrete measures.

The United States import more than 12 million barrels per day. At $50 a barrel it makes $600 million per day. If oil prices were to remain constant for the whole year, the United States will have bought for as much as $220 billion of oil…

Introduction: a picture is worth thousands words:

Below is a table showing the oil consumption per capita of major countries. Please note that the average European Union consumption is similar to the French and German.

It is worth noting is that if Indians were to consume as much oil per capita than Americans, they would need 80 millions barrels per day.  This is totally impossible as the current global production is of 85 million barrels and that there are much doubts this figure will increase significantly in the years to come.

Explanation of the current situation:

The United States are a large oil producers ( 8.5 million barrels per day) when Europe isn’t. This led to less stringent mileage requirements and bigger cars.

The second factor is the lack of high speed trains. Germany, Spain, Italy and France have such trains. Convenient and affordable, they are great alternatives to both cars and planes.

The third factor is taxes. Gasoline is much more taxed in Europe that it is in America.

By checking Wikipedia I discovered that Europeans cars will have to get 47 MPG by 2012 when Americans cars will be required to get only 35 MPG by as late as 2020. This is quite a huge discrepancy…

I remember reading last year that Bill Richardson wanted cars to get 50 MPG by 2020. Recently more voices added to this opinion. An article on Ecogeek brings more reflection on this issue.

If European cars can get 47 MPG  by 2012, I am sure American cars could get 50 MPG by 2015. This would be good for US carmakers. Indeed, if Ford or GM bring to the European market a super efficient car I am sure they would be able to sell them.

This solution may finally reach the United States. As TreeHugger noted:

The president’s announcement included an outline of 10 corridors around the US that will each likely see rail begin construction. So buckle up.(…) With only $8 billion specifically allotted to getting the project off the ground, and an additional $1 billion a year for five years, he’s going to have to be cautious of where he builds rail.

And he seems to have acknowledged this in his planning—instead of an ambitious plan to lay rail from coast to coast, Obama is suggesting 10 corridors of 100-600 miles each around the country. Check out Obama’s vision for high speed rail in America for yourself below–the grey lines are where future lines will hopefully go.

Blue is where high speed rail already exists (yup, it’s that single, solitary line in the Northeast—we’re way behind Japan and Europe here). 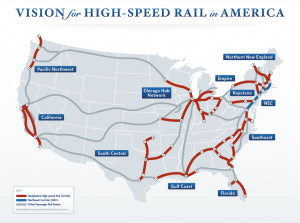 “According to one recent study, implementation of pending plans for the federally designated HSR corridors could result in an annual reduction of 6 billion pounds of CO2

So all in all, the plan looks like a solid first step–and it could very well mean that we finally see a high speed rail system emerge in the US in coming years.