Afforestation projects you should know about

Instead of writing about Earth Day – I consider the issue is too important to have only a day or a week as to me every day is Earth Day – I would like to present you a few afforestation projects.

The Figaro Magazine from France presented a series of articles presenting afforestation projects in South America, Africa and India on how one can make a difference and avoid deforestation.

This shows the Billion Tree Campaign in action. But one should remember that as with energy, the best trees (so to speak) aren’t the ones we plant, but the ones that aren’t cut down.

Here are my favorite projects :

Haïdar El Ali, a 56 years old Lebanese citizen installed in Senegal is definitively an environmentalist and a citizen of theworld. Via his NGO Oceanium he educates poor people on how trees are important.

Sebastiao Salgado and his wife Leila, a Brazilian couple arrived in 1997 in the heart of the Mata Atlantica forest (State of Minas Gerais in Brazil) as they bought 700 hectares of deforested land.

After ten years of hard work, the rain forest is back as 1.5 million trees were planted by their NGO, Instituto Terra. The site has become a natural reserve and an educational center.

Sadhguru, an Indian yogi, is planting trees in the State of Tamil Nadu (Southern India) to avoid desertification which could concern 60% of the state by 2025 if nothing was done.

The Isha Foundation via its Project GreenHands is thus planning to plant 114 million trees to restore the local ecological balance. This seems highly feasible when one know that they planted 850,000 trees in three days in 2006.

Here is a great quote :

“Trees and humans are in an intimate relationship. What they exhale, we inhale, what we exhale, they inhale. This is a constant relationship that nobody can afford to break or live without.” – Sadhguru

To conclude, I would like to point you out to other NGOs and projects that are worth mentioning.

If you need more information about forestry I recommend you reading the dedicated page of the Food and Agriculture Organization. One can find there among many things a most interesting map: 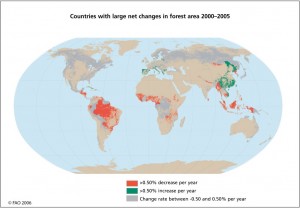