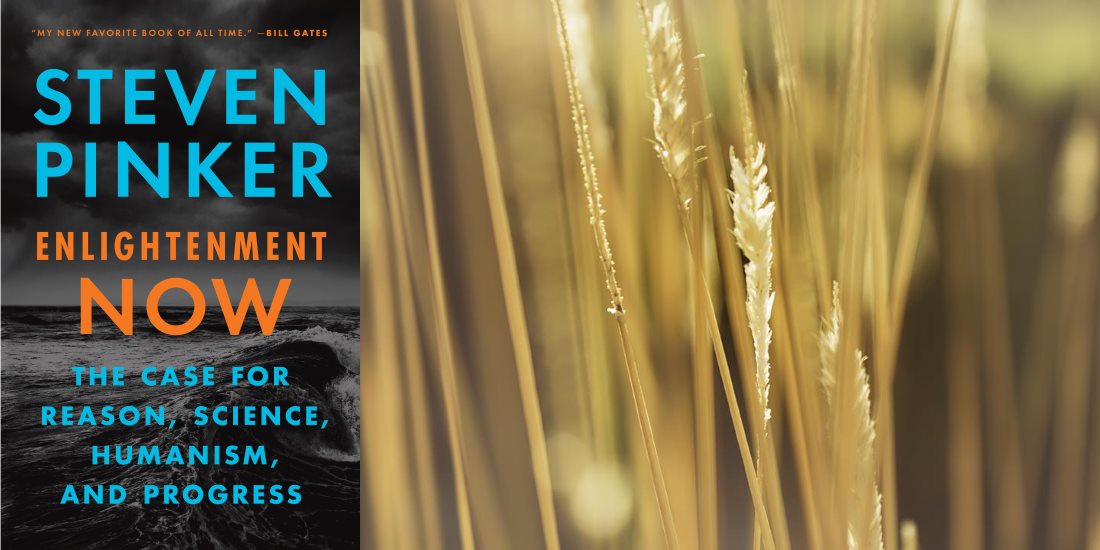 Enlightenment Now is Steven Pinker’s latest book. Pinker was named one of Time Magazine’s 100 most influential people in the world in 2004 and his books are regularly featured in the best-selling lists.

While the purpose of this book is commendable – to show with extensive use of data that we are living in the best of times – two reasons made me cringe while reading it. Firstly, the author completely misses the mark on the topic I have dedicated part of my professional life for the past 10+ years: climate change. Second, it doesn’t address the plastic pollution that is cursing our oceans.

The author fails miserably to address this in a meaningful way and advocates for three main solutions, two being not exactly real ones. Indeed, the author advocates taxing carbon (yes), nuclear (no) and geoengineering (NO!).

While taxing carbon globally and in a sufficient manner will be part of the solution as I have explained previously, nuclear cannot contribute in a meaningful way to to our decarbonization. I used to be pro-nuclear before Fukushima. Now, nuclear is three times more expensive than solar and wind and it literally takes a decade to build a reactor with the sufficient safety features.

Between the time a country decides to restart building reactors in a massive way and the time these come online,  several times over the capacity in wind and solar could have built, including battery parks, backup systems and transmission lines.

The author disses wind and solar as too insignificant and taking too much space. It misses the point that a field with a wind turbine still can be cultivated and that a lot of the solar capacity can come from the roofs of the buildings themselves.

Geoengineering, is just simply not a solution. Even if the author advocates for very limited solutions in both space and time, we simply do not know how this would play. And it gives license to polluters to keep on polluting, and this is morally wrong. Earth is a very complex system. We, mere human, can not and should not rely on such fixes.

This is another very worrying topic. A study have found out that if we continue on current trends, we could end up with oceans having more plastic than fish by mid-century. This is 32 years from now. News of plastic gyres have made headlines lately and the whole topic is simply not mentioned in the book (or at least have not seen in while browsing the environmental section of the book, nor is it referenced in the references at the end of the book).

On other topics, the author is seeing reality through pinker-tinted glasses (haha) and say that all is well in the best of the world. Perhaps in his neighborhood. Perhaps through the lies, damn lies and statistics he is showcasing in his book… but millions are still hungry and un-educated.

But a lot of the economic development of the past sixty years have been detrimental. See the huge amount of problems of all kinds, deforestation, obesity, diabetes, staggering inequality… We need to concentrate on quality over quantity.

Granted, Mankind has gone a long way in the past two centuries. But threats such as increasing inequality, climate change, plastic pollution and many others could undo all that and Mankind has a whole. The next two or three decades are just fraught with wicked problems to solve and failure to address them in the right way will kill millions and cause poverty for billions.

I have to admit that I did not finish this book. I stopped when the author started talking about carbon capture and storage (again, not a solution, and this for many reasons I outlined almost ten years ago on my blog) and solar cells that would generate a hundred times more energy that they do currently. Again, it might happen one day if our global societies do not collapse in the next 20-30 years because of global warming.

But we need REAL solutions now, both to climate change and plastic pollution. Not by mid-century or beyond. Time is not for complacency, it is time for action !