Carbon pricing in 2016 : a global overview

The following article is based on an essay I submitted for my Sustainable Energy Solutions Certificate I am doing at Pinchot University as part of my MBA in Sustainable Business.

As the threat of climate change gets more and more real, many nations around the world are putting a price on carbon and are enacting either carbon taxes or emissions trading schemes.

“The combined value of the regional, national, and subnational carbon pricing instruments in 2015 is estimated at just under US$50 billion globally, of which almost 70 percent (about US$34 billion) is attributed to ETSs [emissions trading systems] and the remainder (about 30 percent) to carbon taxes.“

Currently more than 12 percent of global carbon dioxide emissions are being priced. 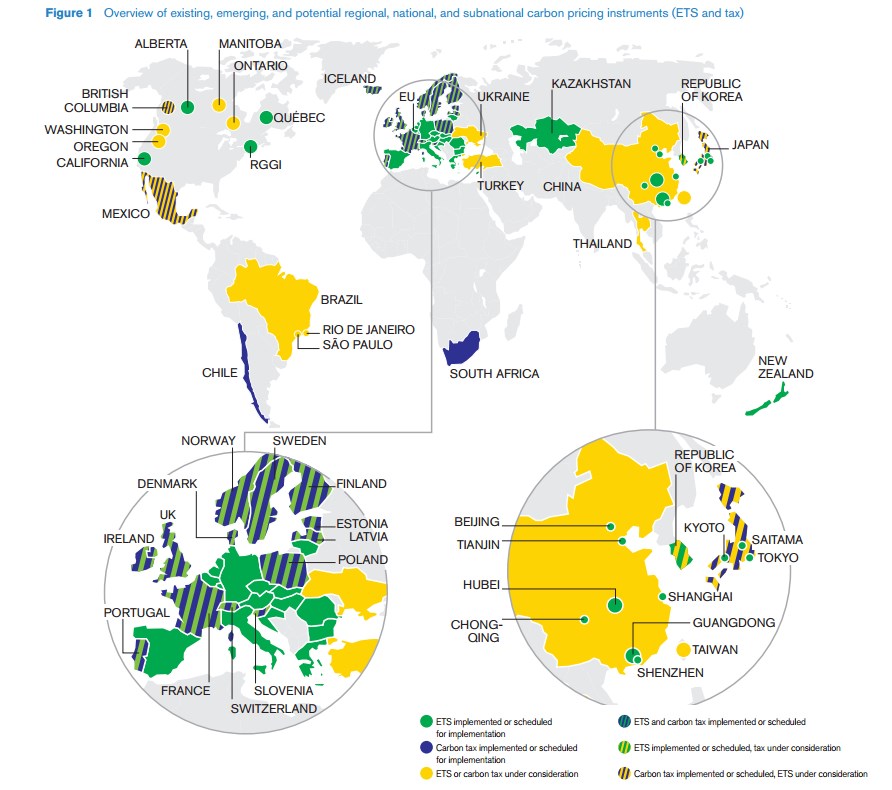 Consumers – and sometimes producers – just pay for the carbon pollution they emit as they burn fossil fuels. And carbon taxes are gaining increasing acceptance around the world.

Finland was the first to introduce a carbon tax as early as 1990. To date, countries as varied as Norway, Japan, Chile, Ireland and China are directly taxing their carbon emissions, all with resounding success. An example of that is the carbon tax enacted in British Columbia, Canada, which successfully cut emissions per capita by 12.9 percent from the year of its enactment in 2008 to 2013. That is over two percentage points per year.

Given the urgency to act on climate and the successes of the initiatives globally, taxing carbon emissions has been endorsed by the OECD, the International Monetary Fund and the World Bank. A recent study from the MIT (2016) strengthened the case even more, stating that solving climate change simply can not be done without this tool.

Even more surprising, according to a study carried out globally, 87 percent of the world’s population supports some form of carbon tax as a means to tackle climate change. A 2015 New York Times editorial called for the implementation of a carbon tax in the United States. Similarly, several polls have shown that a majority of Americans are willing to act on climate, even if they have to pay for it.

Cap and trade is another mechanism for reducing carbon emissions that allows trading emissions between large polluters. This is a market-based approach that requires a governing body allocating a certain amounts of permits to pollute. To work, there should be just the right amounts of permits, sold at the right price. This is tricky to make it work.

Globally there are a few examples, notably in South Korea and in the European Union. The European Union Emissions Trading Scheme (EU ETS), enacted in 2005, seemed to be a good tool to cut carbon emissions, as it covers 45 percent of emissions of the 28 countries. But so far, it has brought mixed results due to the fluctuation of the carbon price. Currently the price is below 7 Euros per metric ton.

The system has been plagued for many years by too many allowances or free passes. To make it work, it would need to make everyone pay a set minimum price that is compelling enough to push utilities and industries to ditch coal for lower carbon solutions such as natural gas, or even better, renewable energy sources.

The closest examples are in California and New England. RGGI is an effort from the States of Connecticut, Delaware, Maine, Maryland, Massachusetts, New Hampshire, New York, Rhode Island, and Vermont to cap and reduce CO2 emissions from the power sector.  It has slashed emissions by 23 percent in only three years thanks to the decreased use of coal and to more efficiency and renewable energies. This has enabled inhabitants to save more than a billion dollars and created 16,000 jobs.

Both carbon taxes and cap and trade schemes are gaining momentum. Many more countries – such as South Africa or Brazil, Turkey or Ukraine – are considering introducing a carbon pricing mechanism to cut emissions quickly and spur economic growth.

Worldwide, carbon prices vary enormously. A World Bank report shows that prices vary from less than one dollar per tonne to $130 in Sweden. The authors notes that :

“The majority of emissions (85 percent) are priced at less than US$10 per tCO2e, which is considerably lower than the price that economic models have estimated is needed to meet the 2°C climate stabilization goal recommended by scientists.”

But to have an impact on climate change mitigation, the price should be set to a minimum of $30-$40 per tonne of CO2 equivalent.

One thing is certain, however. Discussions about pricing carbon are just beginning. According to the World Bank, 22 percent of global emissions could be taxed soon. 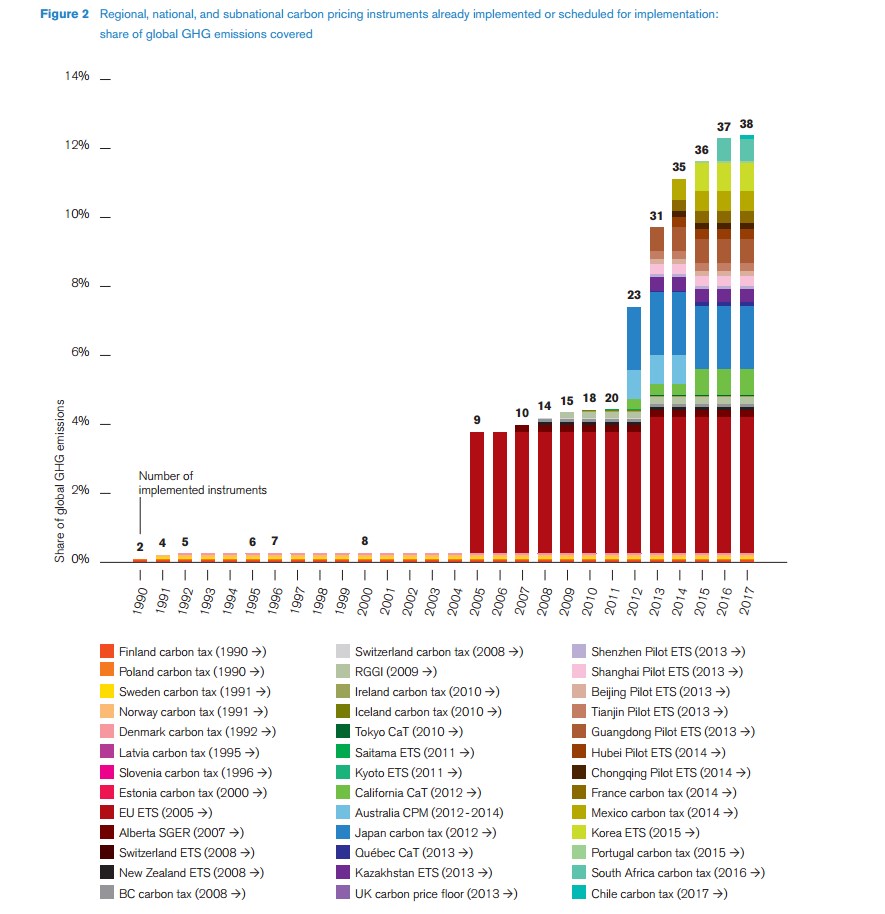 Thanks to my friends and teammates Lex Agapinan, Mike Chiles, Stephanie Colbert and Rick Dickinson.
It was a genuine pleasure working with you four !