A look at deaths per TWh by energy source

With all the agitation around the Fukushima catastrophe, I thought it would be interesting to put some facts and figures on the dangerosity of  energy sources, including oil, coal, natural gas, some renewable energy sources and nuclear…

The global death rate for coal is 161 per TWh (15 in the United States), 36 for oil, and a staggering low 0.04 for nuclear. Of course, this doesn’t take into account the people who will die because of the Fukushima accident.

Nonetheless, nuclear will still kill much less people than fossil fuels – and will kill even less if we increase safety measures and transparency of the industry.

Here is the table found at Next Big Future :

An image being much more powerful than words, here is something I found on Seth Godin’s blog : 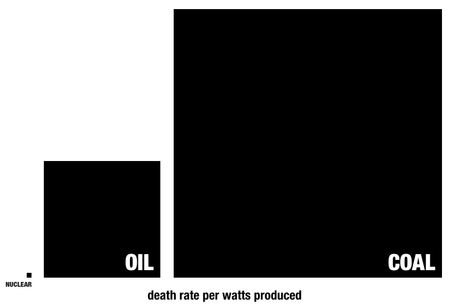 The table above refers to Banqiao. This name rang a bell as I read about it in a French weekly. This is a name of a Chinese dam, which failure in 1975 killed hundreds of thousands of people.

We haven’t stopped using hydropower afterwards, and nor should we abandon nuclear after Fukushima.

We should however seriously increase safety measures and transparency and of course, start replacing older reactors with new ones.

It’s difficult not to get spooked by terms like “meltdown,” “radiation clouds,” and “radioactive leakage.” But let’s remember that nuclear reactors have operated peacefully, quietly, and safely for decades in countries from Japan to France to the United States.

Over the last five decades, there has been just one nuclear accident that caused any deaths at all – at Chernobyl, and that was a poorly designed reactor, unlike any of the ones in the United States or Japan. It had almost no safety codes or procedures.

The accident at 3 Mile Island in the United States did not actually kill anyone. There was no significant radiation leakage because in the US – as in Japan – all reactors have steel or concrete containers to prevent such leakage. That’s why there were no illness resulting from radiation after the 3 Mile island accident.

And the new plants that have been built in the last decade are safer – the OECD says 1,600 times safer than the old ones. And the 3rd generation reactors being planned now, which will be built later, are safer even than those.

Now, all energy sources have their risks when being extracted.

Oil and coal have far worse safety records than even decades-old nuclear plants. The BP oil spill, for example, was triggered by an explosion that instantly killed 11 workers and then poured 4 millions barrels of oil into the Gulf of Mexico.

In a thoughtful article in Slate, Will Saletan does the math and finds that if you add up all the deaths caused by oil explosions and the like, the rate of death per unit of energy extracted is 18 times worse for oil than it is for nuclear energy. With hundreds of people dying in mining accidents, coal is also much more likely to kill people working on it or around it than nuclear. And none of this counts the millions of people who get diseases and die a premature death thanks to pollution.

Another article, this time by George Monbiot in the Guardian :

A crappy old plant with inadequate safety features was hit by a monster earthquake and a vast tsunami. The electricity supply failed, knocking out the cooling system. The reactors began to explode and melt down. The disaster exposed a familiar legacy of poor design and corner-cutting. Yet, as far as we know, no one has yet received a lethal dose of radiation.

Some greens have wildly exaggerated the dangers of radioactive pollution. For a clearer view, look at the graphic published by xkcd.com. It shows that the average total dose from the Three Mile Island disaster for someone living within 10 miles of the plant was one 625th of the maximum yearly amount permitted for US radiation workers.

This, in turn, is half of the lowest one-year dose clearly linked to an increased cancer risk, which, in its turn, is one 80th of an invariably fatal exposure. I’m not proposing complacency here. I am proposing perspective.

This could actually become my 12th reason to support nuclear… What do you think ?